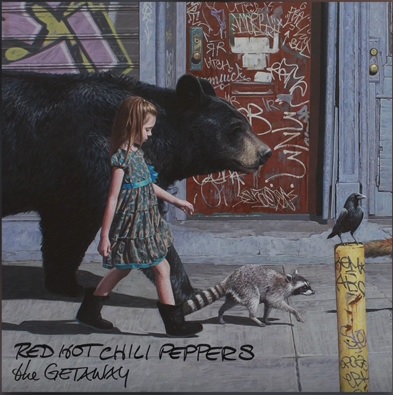 The Chilli’s wrestle between their funk-rock roots with moodier, ambient landscapes.

It’s hard to review any new The Red Hot Chilli Peppers (RHCP) albums after the departure of guitarist John Frusciante. Their last album with Frusciante – the double-LP Stadium Arcadium – showcased the height of the band’s songwriting powers, although there was certainly a lot of filler. (I mean, what double LP do you know of that’s consistently great?). From 1991’s Blood Sugar Sex Magik to Stadium Arcadium, his Hendrix-esque guitar playing was a key part of the RHCP sound. His most recent departure in 2009 left a serious gap in the lineup – a gap that would be filled by Josh Klinghoffer, the band’s guitar techie.

Klinghoffer certainly isn’t a bad guitarist. His debut with the RHCP on their 2011 album I’m With You was clearly an attempt to play into an established sound. Though compared to Frusciante, Klinghoffer has a bigger emphasis on soundscapes with the use of delay, reverb, chorus and vibrato. I’m With You had some good songs, but the front-and-centre nature of the guitar playing was missing. It felt like it took a backseat and was underwhelming compared to what had come before. Their new album, The Getaway, continues the new sound trajectory led by Klinghoffer, and it depends on whether or not you like this sound as to whether you’ll enjoy this album.

The opening song ‘The Getaway’ begins with a beatbox high hat. The drums and guitar enter with a very RHCP style funk lick, and they’re joined by Flea as he enters with his bass lines. It’s an unusual start to the album as it’s a more mid-tempo, melancholic and ambient start rather than the usual in-yo’-face starters on previous albums. The second song ‘Dark Necessities’ begins with Flea playing a fairly generic bass line, joined by piano and delay guitar pedals. The build-up ceases and Flea enters with a slap-bass riff reminiscent of their 2002 song ‘Can’t Stop’. ‘Dark Necessities’ is a good radio song and understandable as the lead single.

After generic songs like ‘We Turn Red’, ‘The Longest Wave’ and ‘Goodbye Angels’ the album shifts. The songs get stronger and vary in style. ‘Sick Love’ is a great 70’s-style funk song that channels the Californation-era RHCP without feeling like a rip-off. ‘Go Robot’ continues the funkiness into spaced out sci-fi territory with a catchy chorus and heavy use of synths. The heavier and more uptempo tracks ‘Detroit’ and (my favourite on the album) ‘This Ticonderago’, breathe a bit of fresh air into a rather mellow affair.

The mellow and ambient nature of the album returns towards the end. ‘The Hunter’ is a very Beatles-esque song (and slightly Elton John, who is credited as playing some of the piano on the album) and easily the best of the ballads on the album. The final track on the album ‘Dreams of a Samurai’ is an interesting song in 6/4 that showcases a heavy and experimental side, with an intro that somewhat channels Ennio Morocone.

The album is a very mixed affair and let’s just accept it: John Frusciante has left the RHCP along with his memorable riffs. Josh Klinghoffer has replaced him with a different sound that places less emphasis on riffs, but instead there is an emphasis filling out the songs with what’s necessary. They’re not really a guitar band anymore. And it is working out this difference which is what will make or break The Getaway for you.

It feels to me that the band is struggling between their well-trodden ground of funk-rock with the more interesting and experimental sonic landscapes that Klinghoffer has brought to the band. Nonetheless, RHCP are showing no signs of slowing down.

I just hope they continue down the road less travelled.