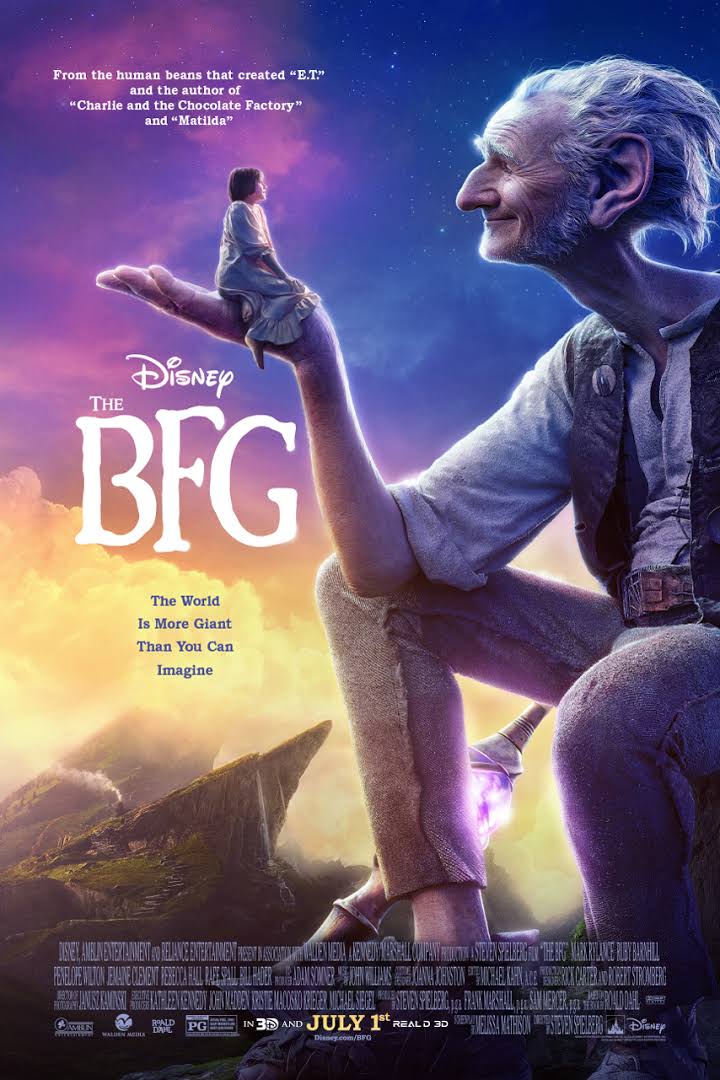 You cannot conjure up ‘movie magic’

I don’t remember reading The BFG when I was at school. I remember we did a few Roald Dahl books but mostly his autobiographical books like Going Solo. His positive presence in many a-90’s child is palpable, as we all also grew up with Matilda and Charlie and The Chocolate Factory. So when Disney teams up with Steven Spielberg, the writer of E.T. – the late Melissa Mathison – and John Williams on music duties, surely we’re expecting ‘the new E.T.’?

The BFG (The Big Friendly Giant) follows the story of Sophie (Ruby Barnhill) who lives in an orphanage in London. Sophie is quite an independent and strong young lady that happens to glimpse BFG (Mark Rylance) one evening and is consequently taken by BFG to ‘Giant Country’. There Sophie discovers the world of giants, whose delicatessi of choice is young children. However, the BFG is a tender-hearted vegetarian giant that befriends young children and is a ‘dream catcher’. Sophie and BFG form a bond and then work together to stop other giants terrorising England and eating children.

It’s a good story and it makes sense that Melissa Mathison was tapped to write the screenplay, however it fails to connect in the unparalleled ways that E.T. did. One of the main problems I believe is the character of Sophie. She’s so unlikable. There was a real disconnect and a lack of pathos with her orphan status. There was so much potential in this, especially as BFG and Sophie are effectively orphans in their respective situations. There are scenes – such as the dream catching scene – that attempt to connect Sophie with BFG, and you really get the sense that the film is trying to make us to connect. This scene also looks really magical –  that ‘movie magic’ – but because we haven’t connected well with Sophie or BFG, the scene falls flat.

Mark Rylance’s performance as BFG is very good. I’ve only seen him in Bridge of Spies where he was fantastic and here he again proves to be an actor worth watching. Despite issues with the characters connecting, there are moments of pathos with BFG, and only because Rylance’s performance is good. I can’t wait to see what he’ll be doing next (apparently Spielberg’s Ready Player One). Jermaine Clement is also quite good as Fleshlumpeater, the leader of the bad giants.

The BFG also suffers from a few pacing and tonal issues. It felt like the first 20 minutes were a little bit of a drag, where nothing really happened. The most exhilarating sequence in this period was when BFG races through London, hiding himself from ‘human beans’ as he races off back to Giant Country.

My favourite part of the movie was in the third act where Sophie and BFG seek help from the Queen of England to defeat the bad giants. Even though these sequences were hilarious, they felt so bizarre and ridiculous and completely out of step with the tone of the rest of the film. It was as though the filmmakers felt they needed to send up everything about the English Monarchy to absurd heights to establish its ‘English-ness’. There were also many useless characters and wasted actors in these sequences, such as Rebecca Hall’s Mary.

I wonder whether Mathison’s screenplay was up to the standard that she would have wanted as she sadly died before the film was completed. John Williams’s score is adequate, but forgetful. It’s no secret that Disney are going gangbusters to connect with the nostalgia of our childhoods and all of these elements are really good on paper, but Spielberg and co. have attempted to recreate the success of yesterday-year and given us a merely OK movie.

All of the elements are there to create a magical fantasy film that wants to capture the wonder of Roald Dahl’s story, but when you ‘know what they’re trying to do’ – perhaps the magic just isn’t there.