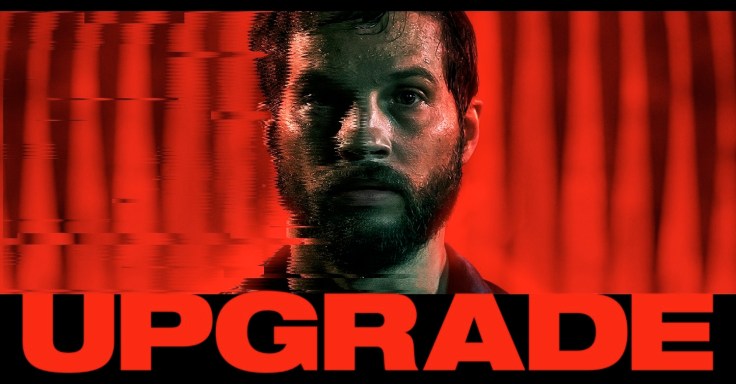 Do you remember the late 90’s music/variety show Recovery? Well, not many people seem to remember waking up on Saturday morning, watching RAGE on ABC which was then followed by Recovery (or did they tune into Video Hits?). Either way, the guy that would do the music reviews, Leigh Whannel, is the writer/director of Upgrade and half of the creative team behind the original SAW films.

Upgrade follows Grey (Logan Marshall-Green), an old-school, analogue-type guy who prefers vinyl over digital and homemade pizzas over machine-made. When his wife (Melanie Vallejo) is brutally murdered and he is left paralysed in a mugging, Grey agrees to trial STEM, a computer chip inserted into his spine that offers him the ability to walk again. With his mobility back, Grey hunts down the men that killed his wife with a detective (Betty Gabriel from Get Out) hot on his trail. What follows is a brutal revenge flick that ponders the nature of A.I. and our relationship with technology.

Upgrade is easily the most interesting movie I have seen this year. To be sure, I have seen the blockbusters, but they haven’t been anything remarkable or standout in my honest opinion. I enjoyed Infinity War and Solo was very ok, but Upgrade was a breath of fresh air – a play on the revenge flick story with an exploration of our relationship to A.I. It had shades of The Terminator, and has clearly drawn comparisons to David Cronenberg’s ‘body-horror’ films like Scanners and The Fly, as well as Spine Jonze’s Her. Its action is also quite impressive, especially considering that Upgrade was made on a relatively low budget. There’s an interesting use of steady-cam that takes over when Grey allows STEM to use his body to fight for him. These scenes are both brutal and humorous as Grey watches on as his own body shows amazing, defensive capabilities.

The most interesting parts of Upgrade were when it presented moral questions about A.I. and human hybridisation. When Grey has his first confrontation with one of the baddies, he allows STEM permission to control him and STEM displays amazing fighting capabilities with Grey’s body. When STEM kills the man, Grey then stands in disbelief as he says “I need a moment…I have just killed a man.” But was it Grey? His whole body is paralysed and functional only by the power of STEM, but he did give permission for STEM to take over. This happens again later as he allows STEM to torture another baddie for information – Grey’s body is taken by STEM as he enacts repulsive things as he turns away in disgust. Is one responsible for the acts of the body if one doesn’t quite know what

The film also introduces interesting ideas about superior races. Grey is hunted down by the men that murdered his wife. These men have also been ‘upgraded’ with guns in their arms and special x-ray vision amongst other abilities. One of the leaders asks Grey to join them as a superior race of humans. Indeed, what dangers are there in genetically or artificially upgrading people? These kinds of concerns are becoming a reality, especially given discussions around genetically modified babies, where you can pick IQ and athletic ability. Will they be a master race of oppressors?

Upgrade is the most memorable and interesting film I’ve seen thus far this year. It is destined to become a cult classic, and even relishes in its over-the-top violence and b-movie-ness.

If that’s your thing, allow your interest to take over.