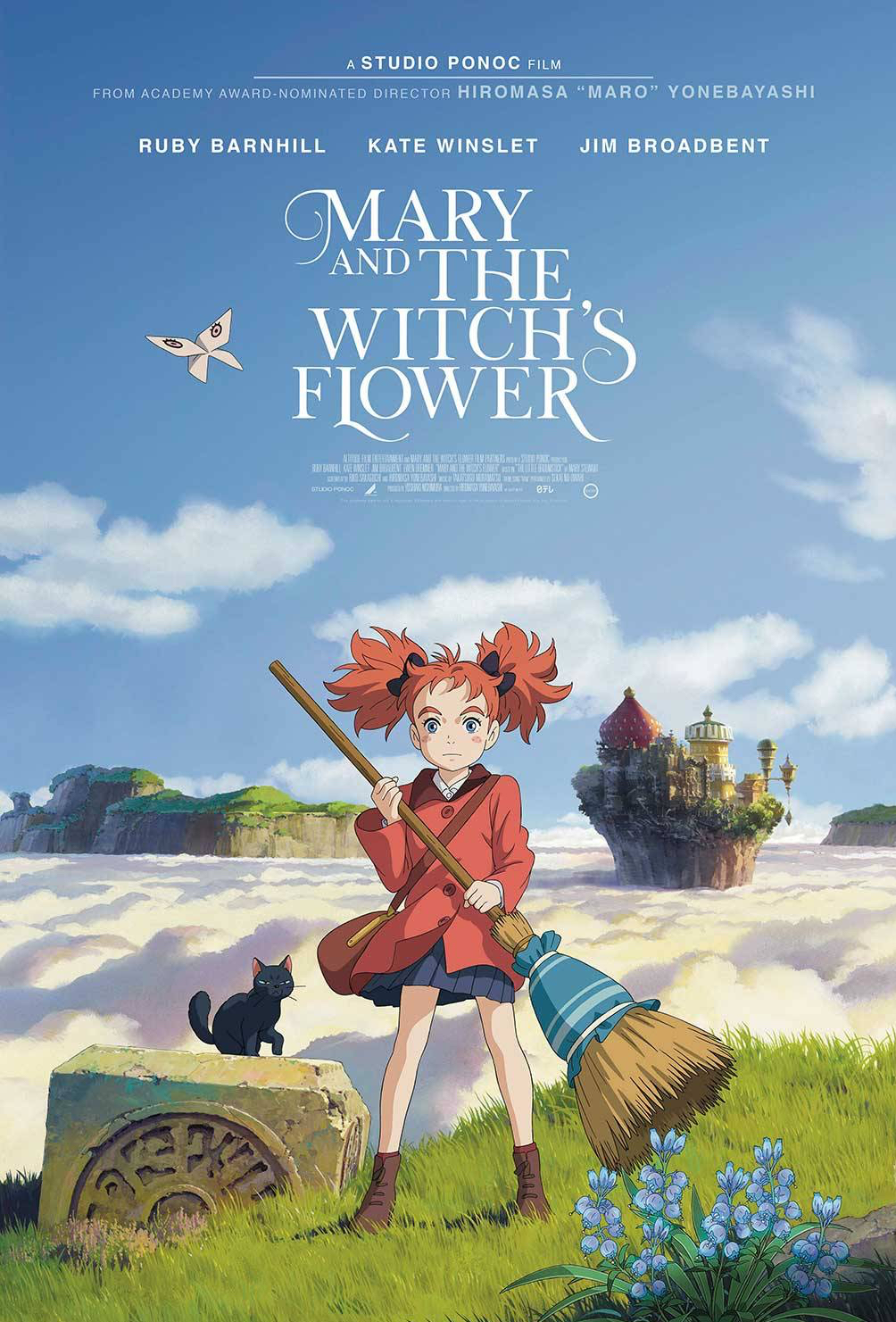 From the legacy of Japan’s Studio Ghibli comes sister company, Studio Ponoc, with their debut film, Mary and the Witch’s Flower.

From the opening with a Ghibli-esque logo of Mary, rather than Totoro, the comparisons between the studios was inevitable. After all, director Hiromasa Yonebayashi was an animator under the supervision of the great Hayao Miyazaki, and also directed some of the later Ghibli works, Arrietty and When Marnie Was There. They were pleasant enough, but left no great impression. Now with a new company, Mary and the Witch’s Flower, riffs on some of the aesthetics of Studio Ghibli while attempting to pave a new way with mixed results.

Mary Smith is a red-haired girl that lives with her great-aunt. Mary is a bit of a loner, with a penchant for clumsiness, pointed out to her by amused local boy, Peter. After Peter’s cats, Tib and Gib, lead Mary to a mysterious flower known as a ‘Fly-By-Night’, a flower that grants witches magical powers, she is thrust into a Harry Potter-esque world of witch training, where she excels. Witch-trainers Madame Mumblechook and Doctor Dee are excited by their prodigious new student, yet we discover they are actually up to no good. Tut, tut!

There’s much to like about Mary and the Witch’s Flower: the music is fantastic and the animation is quite good (as you would expect from ex-Ghibili staff). Even the designs are very reminiscent of Miyazaki’s steampunk and surreal aesthetic; it has an opening similar to Laputa, as well as floating buildings – Mary also has grotesque and malformed creature designs like those found in Spirited Away. Mary has a charm, a wonder about the magical world, which thankfully never relies on its animator’s heritage (but it does share similarities to Kiki’s Delivery Service). Yet, the movie does suffer from pacing and character issues that prevent it being more than ok.

Much of the first act is spent following Mary around with her day-to-day existence, and then as she discovers the mysterious plant and later, a witch’s broomstick. It felt prolonged and unnecessarily drawn out, where the middle section where we meet the witch school should have had more emphasis and would have been more interesting. Especially exploring the mixed motives of Madame Mumblechook and Doctor Dee would have made the third act more understandable. My friend whom I saw it with, stated he felt the middle part of the film went for about 10 minutes and then we were suddenly thrown into a prolonged third act, with several big events that felt like the film was about to end, but kept going. I agreed. Peter is also involved later in the film and Mary has an inexplicably deep concern for him – a puzzling choice as Peter was not developed enough as a sympathetic character. Overall, with some trimming and script-doctoring the film could have been really good, but not great.

I’m grateful I saw it subtitled rather than dubbed. After my early experiences with watching anime, I realised how awful some of the dubbing can be both in terms of bad casting (see Billy Bob Thornton in Princess Mononoke) or just making main characters almost unlikeable (compared the subtitled and the dubbed version of Chihiro in Spirited Away). It was also nice to know some more of the language and understand greater nuances in the dialogue that the subtitles couldn’t completely capture. I recommend seeing it in this format.

Overall, I would recommend seeing Mary and the Witch’s Flower, especially if you’re a fan of Studio Ghibli, but don’t expect anything greater than perhaps the latter films of Ghibli. You can watch the fantastic opening scene (dubbed) below.